Repeating Islands reports on the screening of La Gaita, a film that features the parang group, The Lara Brothers. Nov. 26, 2012. 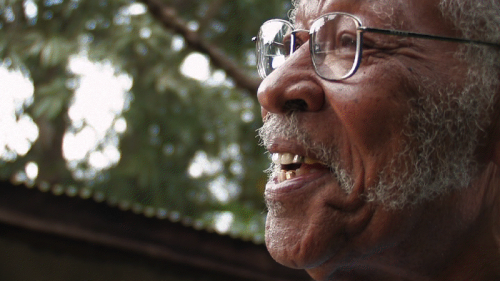 The Trinidad and Tobago Film Festival (ttff) will end its activities for the year on a high note with a screening of the award-winning parang documentary La Gaita, followed by a live performance by the celebrated Lara Brothers parang group, on Saturday 8th December in Santa Cruz.

This free screening and performance will bring to an end the bpTT Community Cinergy series of film events held across the country in 2012.

Winner of the ttff/12 People’s Choice Award for Best Documentary, La Gaita profiles the Lara Brothers, the oldest existing parang group in T&T. The film, directed by Janine Fung, pays loving tribute to the band, telling their story in their own words and music. In particular, the film follows the gregarious, extroverted Willy Lara and his more reserved elder brother, the late Tito, whose moving funeral forms part of the film.

Speaking about her experience making the film, Fung noted that “The Lara Brothers have a responsibility—one they have taken on for the last 70 years—to serve their music, their faith and their country.”

She continued: “They are messengers, travelling from rumshop to rumshop throughout Trinidad performing, because they simply love parang, as a way to express themselves and for the people to relate to that expression.”

The film screening and live performance will be held at Baya’s Place, Chiquitto Drive, Sam Boucaud, Santa Cruz (next to the Brian Lara Grounds) from 7pm. Refreshments will be on sale.

The ttff is held annually in September and October and is presented by Flow, given leading sponsorship by RBC Royal Bank and bpTT, and supported by the Trinidad & Tobago Film Company, the National Gas Company, the Tourism Development Company and the Ministry of Arts and Multiculturalism.

This account of parang music, the music of the Trinidad Christmas, was posted by Shaina Lipp in Afropop Worldwide, 9th November, 2012. 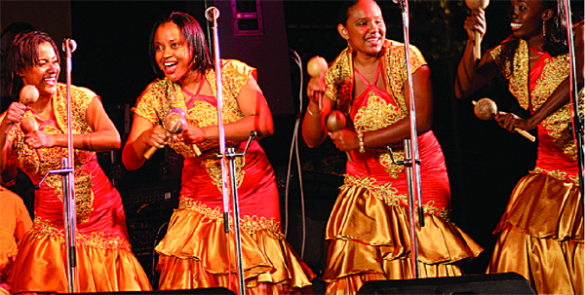 Wake up n’ get out of bed! The parranderos are here to serenade us! Living in Trinidad and Tobago in the early 1970s, you may have fallen the not-so-unlucky victim of parang, a semi-seasonal activity in which groups of musicians and revelers pay festive night time visits to houses in small communities. So, break out the food or the rum and let’s dance!

Parang is one fortunate and fruitful example of the cultural transmission (and the subsequent borrowing and fusing of traditional forms) that results from this travel. The word parang is derived from two Spanish words: ‘parranda,’ meaning ‘fête, or spree’ and ‘parar,’ the verb ‘to stop.’ Traditionally, the serenaders of parang (parranderos) visit the homes of families and friends during the night to wake them from sleep; they play music, dance and sing as they go paranging throughout the town to spread good vibes and general merriment. In exchange for entertainment, parranderos are usually given food and drink: pastelle (a type of bready desert), sorrel and rum.

The earliest examples of the music are heavily influenced by joropo, a classic style of Venezuelan folk music, but quickly came to include a significant helping of Caribbean groove in the mix. Because parang takes its original influences from Afro-Venezuelan culture, we see an instrumentation that reflects this migratory origin: the cuatro, maracas, claves, box bass, bandolin, caja and the marimbola. But the parranderos do not stop there! For the best sound, wood blocks and graters, scratchers and spoons are incorporated into the mix, adding a percussive heft to the soaring vocals.

Over the past several decades, parang has changed in some significant ways, accounting for broader developments in Trinidad and Tobago’s cosmopolitan musical culture. While the caroling-type tradition is still practiced in some places during the holidays, larger and more organized ensembles have expanded the style, doing much to professionalize the once informal sub-genre. In the course of doing so, the parang season has been extended significantly . What was once a holiday custom now takes up much of the year, beginning in October and running through January, and culminating in a series of national contests hosted by National Parang Association of Trinidad and Tobago (NPATT). With the addition of new instruments, the implementation of riddims and more English language, parang has aligned more closely with mainstream Trinidadian culture.

Perhaps most exciting are the recent developments…In an unprecedented announcement, the NPATT ruled: regarding all competitions and official instrumentation, parang now officially incorporates the steelpan! While in the past some groups have played steelpan, now for the first time it will be considered as an official component of the parang ensemble and will be judged alongside the more traditional instruments in the competitions that define success for parranderos. It would seem the addition of pan is a smart move on the part of the NPATT, given plethora of new possibilities available to the instrumental expansion, such as soca-parang, and will likely increase versatility of the genre. and we can’t wait to hear it! 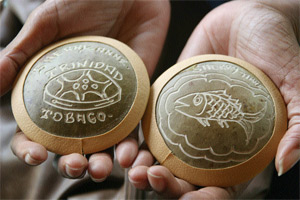 The following report was published on the website Spiceislander.com, Nov. 7th, 2011. 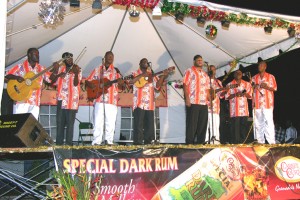 It is with deepest regret and enormous sorrow that the Carriacou Parang Festival Committee learnt of the sudden departure from this world, of the leader of “Men from the Mainland Parang Band ~ Anthony “Jericho” Greenidge ~ on Thursday 3rd November, 2011.

Jericho was an incredibly talented cultural minded individual who has made significant and priceless contributions to the development of the Carriacou Parang Festival over the years. Jericho first became involved in the festival as an MC more than 20 years ago, however his involvement didn’t stop there; as an announcer and cultural enthusiast, Jericho was the “main man” for voicing the radio commercials to promote festival.

Jericho was also instrumental in organising the very first and only parang band from the mainland Grenada to participate in the annual Carriacou Parang festival, thus bringing an added dimension to the festival.

Throughout the many years Jericho was always available to assist the committee at a moment’s notice with no condition whatsoever attached. He also used part of his time on radio to promote the festival to audiences both at home and abroad.

As we struggle to come to terms with Jericho’s sudden passing, our hearts go out to his family, friends and colleagues; especially the members of the Men from Mainland parang band. Jericho was an important presence in so many people’s lives and  he will be sadly missed by all of us.