The following article was written by Gregory Rabess and published in Dominica Vibes, Dec. 22, 2011.

One the high points of the Waraka Séwinal Festival held in Atkinson last weekend was the awarding of a plaque of recognition to séwinal stalwart, Emmanuel ‘Bo’ Durand.

Mr. Durand received the award at the Grand Séwinal Concert held on Saturday evening December 17 for his contribution to developing and promoting the séwinal tradition. He has been involved in the séwinal tradition for over forty years. A multi-instrumentalist, Mr. Durand plays the steel pan, accordion, tanbou, gwaj and boom; typical instruments used in séwinal.

The séwinal tradition runs very strong in the Durand family. His grandfather Mr. Emery Zake Durand and uncle Medland Durand and his father Rockson Durand were the leading séwinal musicians during the 1940s and 50s.

According to Mr. Durand, he started ‘running séwinal’ from his teens. He recalls the use of steel pans in the late 50s as part of séwinal. He was a member of a steel pan group in Atkinson.

The group went from house to house in Atkinson and the Kalinago Territory entertaining families and spreading the joy of Christmas. In more recent years, he concentrated on the accordion and tanbou, performing with his own group of musicians and with Bann Akayo.

After receiving the plaque of recognition, Mr. Durand entertained the crowd with a guest performance on the accordion.

The festival organizers, the Atkinson Village Council and the Waraka Séwinal Festival Committee intend to recognize other séwinal stalwarts at future editions of the Waraka Sewinal Festival. 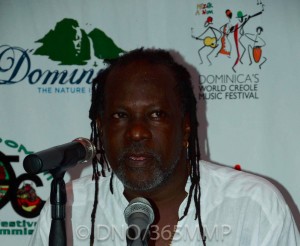 WELCOME… to fifteen years of pulsating rhythms! DOMINICA’S WORLD CREOLE MUSIC FESTIVAL sets the stage for you to make a memory and come dancing with us on the Nature Island of the Caribbean THANKS to our headline sponsor DIGICEL…the Bigger, Better Network

DOMINICA’S WORLD CREOLE MUSIC FESTIVAL created in 1997 has brought to you Creole music for fifteen years. The festival has grown to be the Caribbean region’s main avenue for exposing the various genres of popular music forms in the Creole speaking world. This mix of fusion composition laced with generous samplings of Dominica’s folk traditions, Creole cuisine, a great festival atmosphere, and the hospitality of Dominican people make it a unique celebration check out the Discover Dominica Authority’s (www.discoverdominica.com) for things to do while on island.

DOMINICA’S WORLD CREOLE MUSIC FESTIVAL brings you melodic genres rooted in harmonious fusion from the countries of the Creole-speaking world. Musical forms that have gained exposure and dominance at the festival include Cadence-lypso, Kompas, Zouk, Soukous, Bouyon, even Zydeco (from the US state of Louisiana). Here’s your chance to come on down and join us.

DOMINICA’S WORLD CREOLE MUSIC FESTIVAL is traditionally held on the last weekend of October and it is strongly rooted in Dominica’s Independence celebrations. Our regulars and visitors to the island have many opportunities to get an appreciation of the rich cultural attributes of ‘DOMINICA…The Nature Island’. Come for Creole in the park…stay for WCMF! 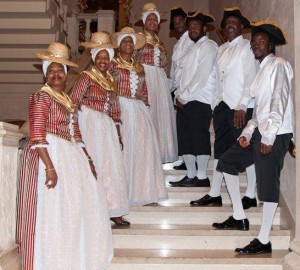 The groups founder, Sabina George-Mingo works tirelessly with Dominican citizens and their children, in teaching dances such as, flirtation, waltz, belle’, quadrille, heel & toe. Adults got rave reviews from the audience as they graciously danced the 18th century waltz and kids bounced around on stage with bows and arrows, performing Karifuna, while teen men & women danced the quadrille, all showcased on Saturday.

A live band serenaded the audience and dancers with cultural rhythms and musical instruments such as the boom boom, shack shack, accordion and drums.

Sitting in amazement was a hall filled with Dominicans and foreigners, who felt deep memories as their island’s culture came alive. Sabina ensures that every segment was perfect! From the dancers array of brightly colored attires, including jazzed up fullers and head pieces, hyped movements and stunning smiles.

Enticing dishes such as salt fish with bakes, peleau, fruit juices and other delicious foods were served.

A special thank you to all supporters and sponsors.