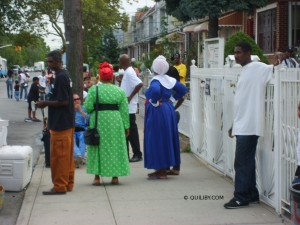 The Spiritual Baptists faith is recognized as one of the African-derived/influenced Christian religions of the Caribbean. Its membership in the Caribbean consists primarily of people of African descent, although people of other ethnic origin have joined the faith, especially some descendants of Indians of the Asian sub-continent, who came to the Caribbean as indentured laborers. The followers of this faith have had to endure political persecution and social discrimination. For example, in 1917 public practice of the rituals of the religion was banned in Trinidad with the passage of the Shouters Ordinance by the colonial authorities.

Worshipers were forced to pursue their religious activities underground, until the repeal of the ordinance in 1951 after much struggle on the part of the Spiritual Baptist community. The respect of the faith has grown immensely over the last two decades with the declaration, in Trinidad and Tobago, of March 30th as Shouters Baptists Holiday. This is the date in 1951 when the Shouters Ordinance was repealed. In New York City over the last quarter century efforts have been made to consolidate an archdiocese.

Authors on Caribbean religions have commented upon the style of singing and overall musical performance observed among the members of Spiritual/Shouter Baptist faith in the Caribbean. This style, which incorporates hand clapping, rhythmic percussive vocal utterances, vigorous body movement, and the singing of hymns at fast paced tempos, has been recognized as embodying African and African-American musical performance traits (Herskovits 1976, Waterman 1948, Simpson 1980, Williams 1985).

In terms of repertoire, followers of the Spiritual Baptist faith have customarily sung Sanky and Moody hymns (Herskovits 1976, Waterman 1948, Glazier 1997, Williams 1985). Some of these hymns were brought to the Caribbean by the formerly enslaved, who fought on the side of the British in the war of American Independence. These ex-soldiers were granted lands in the British colonies of the Caribbean where they established villages, for example the company villages in southern Trinidad. Contemporary studies indicate that variations of traditional hymns, sung within African American churches, survived and are performed by worshipers of the Spiritual Baptist faith in the Caribbean (McDonald 1994).

The video, St. Michael’s Songs, presents examples of the hymns performed at the St. Michael’s Spiritual Baptists Church of Brooklyn, New York. Recorded in August 2006, these examples illustrate many of the stylistic features of singing that have been identified as characteristic traits within this religious community. They include:

Sacred objects and ritual paraphernalia of the faith are also visible in the video.