Jean-Léon Destiné, a Haitian dancer and choreographer who brought his country’s traditional music and dance to concert stages around the world, died on Jan. 22 at his home in Manhattan. He was 94. 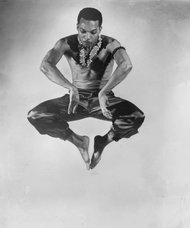 Considered the father of Haitian professional dance, Mr. Destiné first came to international attention in the 1940s and remained prominent for decades afterward.

As a dancer, he performed well into old age. In 2003, reviewing a program at Symphony Space in New York in which he appeared, Anna Kisselgoff wrote in The New York Times that Mr. Destiné’s number stopped the show. She added, “He looked agile and nuanced, mesmerizing in a bent-legged solo.”

As a choreographer, he directed own ensemble, which came to be known as the Destiné Afro-Haitian Dance Company.

The company, which presented work from throughout the Caribbean, was devoted in particular to dances from Haiti. Accompanied by vibrant drumming — Mr. Destiné collaborated for many years with the distinguished Haitian drummer Alphonse Cimber — these dances were often infused with elements of voodoo tradition.

As reviewers noted, Mr. Destiné and company could dance, to all appearances, as if possessed.

Much of Mr. Destiné’s work also functioned as commentary on Haiti’s legacy of colonialism and slavery. In “Slave Dance,” a solo piece he choreographed and performed, the dancer begins in bondage only to emerge, in astonished joy, a free man.

In “Bal Champêtre” (“Country Ball”), among the most famous works choreographed by Mr. Destiné, the foppish customs of Haiti’s French colonists are satirized through sly subervsions of a Baroque minuet.

In the United States, Mr. Destiné was seen on Broadway; at the New York City Opera, where in 1949 he was a featured dancer in the world premiere of William Grant Still’s “Troubled Island,” set in Haiti; and, as a performer and teacher, with the Jacob’s Pillow Dance Festival in Becket, Mass. He also taught at New York University and elsewhere.

Jean-Léon Destiné was born on March 26, 1918, in Saint-Marc, Haiti, to a middle-class family: his father was a local government official, his mother a seamstress. After his parents divorced when he was a boy, he moved with his mother to the capital, Port-au-Prince, where they lived in reduced circumstances.

From a very early age, Jean-Léon was captivated by Haitian music and drumming. As a youth, he learned traditional dance by attending the religious rituals and other celebrations of which it had long been an integral part. He also sang in the folkloric ensemble directed by Lina Mathon Blanchet, a prominent Haitian musician.

In the 1940s, the young Mr. Destiné received a Rockefeller Foundation scholarship to study printing and journalism in the United States. After taking classes at Howard University in Washington, he moved to New York, where he learned to operate and maintain linotype machines, then used to cast type for printing newspapers other publications.

Mr. Destiné, who eventually became an American citizen, also continued dancing. In the late ’40s he spent several years with the company of Katherine Dunham, considered the matriarch of black dance in the United States.

With Ms. Dunham’s company, he danced on Broadway in the revue “Bal Negre” at the Belasco Theater in 1946.

Returning to Haiti for a time in the late ’40s, Mr. Destiné founded a national dance company there at the behest of the Haitian government. By the early ’50s he had established his own company in New York.

Mr. Destiné’s survivors include three sons, Gérard, Ernest and Carlo, as well as grandchildren and great-grandchildren.

For the original article: Jean-Léon Destiné, Haitian Dancer and Choreographer, Dies at 94 – NYTimes.com.

Center for Traditional Music and Dance and Ayiti Fasafas in partnership with El
Museo del Barrio present Rasin Ginen (The African Roots), a showcase of some of
New York’s finest Haitian traditional dance groups, coming together to water the
ancestral roots of Haitian traditional dance, with a special tribute to Haitian
dance educator and elder, Jean-Léon Destiné.  Five companies will perform at El
Museo del Barrio, 1230 Fifth Avenue at 104th Street in Manhattan, on Saturday,
July 14, at 7:30 p.m. The program is presented in conjunction with El Museo’s “CARIBBEAN:
Crossroads of the World” exhibition, on display through January 6, 2013 and is the
third and final event in the “Louvri Baryè:  Opening the Gates” Haitian concert
series, developed by Ayiti Fasafas and Center for Traditional Music and Dance.

The traditional dances of Haiti trace their roots to West and West Central Africa.
Having survived the Middle Passage, they flourished following Haitian independence
in 1804. In the twentieth century a black consciousness movement took the dances
to the stage. Jean-Léon Destiné, born in St. Marc, Haiti, pioneered this movement
and was instrumental in the creation of the National Folkloric Troupe in 1949. The
companies that will make up the program at El Museo del Barrio carry the spirit
and vision of pioneers like Mr. Destiné into the twenty-first century, and into
the Haitian diaspora in New York. Dance anthropologist Dr. Joan Burroughs, co-author
of a forthcoming biography of Mr. Destiné, will present highlights from his career,
and the artists will join Ms. Burroughs in presenting Mr. Destiné with an award
for his contribution to Haitian art and culture.  The evening will be emceed by
New York City Haitian radio host and community activist, Lionel Legros.

The following youtube video shows one of the participating dance companies, KANu Dance Theater,
in performance.

The five participating companies display the breadth and the depth of the repertoire.
Feet of Rhythm, founded by Nadia Dieudonné in 1994, has performed in both the United
States and abroad, and many know the company for its outreach to young people in
communities throughout New York City. Haitian American Dance Theater founder Julio
Jean studied at the National School of the Arts in his native Port-au-Prince and
taught Haitian Dance at The Katherine Dunham Institute. He currently teaches at
Cumbe in Brooklyn and Ripley-Grier in Manhattan, and for over 20 years has performed
and taught in theaters and universities across the United States. KaNu Dance Theater,
established in 2003 and directed by Jessica St. Vil, blends contemporary, modern,
and Afro-Caribbean dance to promote change and peace in Haiti and around the world;
the company’s name derives from “Ka Pa Nou,” Haitian Kreyòl for “Our Situation.”
Kongo, a Brooklyn-based group of Haitian artists, musicians, and activists organized
in 1995 by Sanba lead vocalist Oneza Lafontant, weaves together drumming, guitar,
percussion, dance, and storytelling, working from the conviction that the artist
must represent the community and engage it in the cause of positive change.  Peniel
Guerrier, a dancer, choreographer, and musician, began his dance career in Haiti
with Tamboula D’Ayiti, the National Theater, and Bacoulou. Experienced in Haitian,
West African, and Brazilian dance, Mr. Guerrier aims to represent Haitian culture
worldwide through the language of dance.

Thanks to Eileen Condon for sharing the information.