The following article was written by Jared MacCallister and published in the New York Daily News, Sept. 14, 2013. 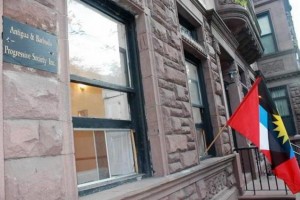 The national flag flies proudly outside the Antigua and Barbuda Progressive Society’s Harlem headquarters, purchased in 1964. Picture by Jared MacCallister.

Those who think Caribbean immigrants are newcomers to New York really need to think again. The 79-year-old Antigua and Barbuda Progressive Society shatters that untruth.

The Manhattan-based organization will have its history and decades-long dedication to Caribbean culture and Harlem, and some of its artifacts, touted in “A Lighthouse in New York: Opening Reception; Panel Discussion,” a free exhibition at the Schomburg Center for Research in Black Culture, 515 Malcolm X Blvd. (at W. 135th St.), from 6 p.m to 9 p.m., in Manhattan, on Sept. 27.

“Everything is going very, very well,” society spokeswoman Mona Wyre Manigo said of the exhibition, which reflects the trials and tribulations of Caribbean peoples — here and abroad — over the organization’s first 50 years of exsistence. “It’s going to be an exciting moment for Antigua and Barbuda. I’ve looked at the documents and every time I think about it, I get chills.”

For example, said Manigo, there are documents about an urgent meeting calling “all Caribbean people in Harlem” to support a letter to Britain, demanding that the head of colonial Antigua be removed from office for mistreating island residents. Antigua and Barbuda gained independence from Britain in 1981.

The donated materials also contain historic correspondence from institutions and individuals, such as Antigua Trades and Labour Union President V.C. Bird, before he became Antigua and Barbuda’s first prime minister.

Donated in 2011, the historic records provide a detailed glimpse into migration to New York and the life and pursuits of new arrvials. The records will later be available for researchers.

In 1934, James Roberts and 22 other Antiguan immigrants started the Antigua Progressive Society, which was incorporated the following year with the goals of promoting their culture, aiding members and their families in times of sickness and death, aiding their Caribbean homeland and encouraging “educational excellence” among youth.

The Antigua and Barbuda Progressive Society was created through a 2010 bylaw change designed to incorporate Barbudian New Yorkers who were served by the now-defunct Barbuda Benevolent Society of America. The Barbuda group was established in 1915 and lasted 62 years.

Today, Antigua and Barbuda Progressive Society members continue to work hard at maintining cultural — and many civic — commitments under a board of directors, including President M. Roz. Olatunji. The group meets monthly at society headquarters, the Antigua and Barbuda House on W. 122nd St. in Harlem.

In addition to aiding Antiguan and Barbudian nationals, the children in the Harlem and other projects, the group fulfills its civic responsibility by participating in the Mount Morris Park Community Improvement Association, Central Harlem’s Community Board 10 and the 28th Precinct Community Council.

In October, the society will commemorate its birthday with a 79th Anniversary Celebration and Awards Banquet, “Honoring Our Past and Embracing Our Future.” The event will be held Oct. 19 in the faculty dining hall of the City College Of New York, 160 Covent Ave., from 7 p.m. to 11 p.m. Donation is $75 and proceeds will aid the organization’s building renovation fund.