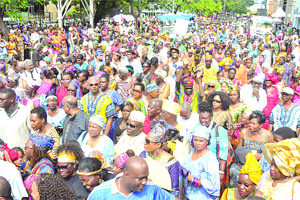 A HANDFUL of devoted Orisha members yesterday kickstarted the Emancipation Day celebrations at the All Stars panyard, in Port of Spain with the spirutal drum calling.

The drum calling, which was the official opening of the day’s celebration, started at 5 a.m., some 30 minutes later than scheduled, with close to 20 participants, beating drums and other instruments, singing, chanting and calling on their ancestors to not only bless the day, but all people of African origin in the country.

The procession began at the panyard on Duke Street, and then proceeded to Piccadilly Street and on to Independence Square where the participants ended at the Treasury Building where the Emancipation Declaration was signed 177 years ago and celebrated for the past 173 years yesterday.

Speaking with the Express yesterday during the procession, Zakiya Uzoma-Wadada, a member of the Orisha faith and participant in this year’s Drum Call, said the idea behind the exercise is in essence a message to the ancestors.

“We are using the time to give thanks and praises to our ancestors for all their blood, sweat and tears,” Uzoma-Wadada said, adding “it is a tribute to our ancestors because we are showing them that we can walk on this earth as we are, not as slaves but a beautiful, creative people”.

Uzoma-Wadada added that the loss of using the drum is symbolic of “losing part of ourselves”.

When asked what can be done to curb the number of African descendants involved in criminal activity, Uzoma-Wadada said the education system needs to be revamped and teach about the Africans prior to slavery to show the children where they came from.

“We have to educate ourselves about ourselves. African people are the only people on earth who do not educate themselves about themselves,” she added.