Musicians speak of the impact of the late Andre Tanker on the 10th anniversary of his passing. Trinidad Express, Feb. 23, 2013. 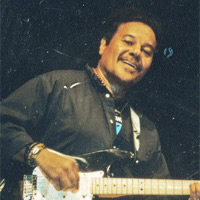 In glowing testament to the strength of Andre Tanker’s character, his friends, family, band members and frequent collaborators all attest to his genuinely wholesome spirit and his penchant for encouraging others to persevere and always be positive. Here are a few words to honour his memory… interviews by Nigel Telesford.

“Andre was one of the most wonderful people I ever met. He was a part of my family – I have two daughters and they both know him and he has been kind to them both. He was really a family type of person. We would be in the studio all the time recording or rehearsing and Andre’s caring and creativity is what stood out the most. We would practise and practise and go over and over and over a song to get it just right and then he would come the next day and change it because of something that happened during the night. The songs never stayed the same way all the time and that was the extent of his creativity. He was like a father to all of us and I don’t think I ever saw him annoyed with anyone – if you couldn’t make a rehearsal for whatever reason – he never made it a problem. When I left Holy Name, I walked straight into Andre Tanker and spent countless years there – for a long time I was the only girl first and then, the only woman. Later on in life, we were joined by Lorraine Bereaux and Nadia Batson.

“Andre was a dream – as a person, as a man, as a friend, he was somebody who always looked out for me and he was my friend. I could talk to him about anything, everything. Up, down, we went through so many good and bad times and he was always there, supportive and encouraging – that’s who Andre was to me.

“Since Andre died, I haven’t listened to any of his music. We did what we had to do immediately after he died: the band had a great show at Little Carib (Theatre) and it was beautiful, but after that, that was it. It was difficult for us to get together and to stay together… Not because we didn’t want to, but yuh know when that light that Andre brought had gone out. It didn’t die, but it flickered and for me it was difficult to listen to his music after that and I really haven’t since. Now I only sing at church and I’m happy with that…

“I was Under The Trees and I got the news (of his passing) Under The Trees. It wasn’t a nice experience at all. I found it very difficult to even stand up after hearing that news because Andre was the person I used to talk to every day, if not every day, every other day. He would call and check in and say hi all the time. I spoke to him the day before because he was going to this party with the hats and he didn’t know where to find a hat and I told him where to go down town and get one and that was the last time I spoke with him. Usually we would talk every day, but on that day, I didn’t hear from him at all.”

“My earliest awareness of Andre was hearing songs like “River Come Down” and “Sayamanda” and “Basement Party” on the radio. Growing up we used to listen to songs that informed us and carried a kind of vibe like that. Coming of age time, well I guess it coincided with him coming back around again and when he got the opportunity to do some re-recording of his songs with Rituals and the Big Bang album, I was able to appreciate him live and in person and working and interacting with him. By then, we were doing some work with the Trinidad Theatre Workshop and he had done the music for Ti Jean and his Brothers, so I was exposed to a whole other side of his vibe too. It was around that time that the singing bug started to take root, so he was one of the first men that we ever vibe or consult with regards to doing music or doing a song.

“I remember one of the things we used to do in those days – before we even formed ourselves into a singing group – a bunch of us would just appear in front of a Tanker stage or a Rudder stage and sing loudly… To the point where we would end up getting invited on stage and in the case of Rudder, we used to open for him at Moon Over Bourbon Street on a Christmas Night.

“Tanker was a great source of inspiration and encouragement – his repertoire, his music, his tone – the kind of Amerindian chanting he would employ; there was always a string vibe there. So when the chance came for us to actually record with him and team up with $hel$hok and do “Ben Lion”, that was a magic moment and a golden opportunity and that’s still one of the biggest songs in our repertoire today.

“It was an honour for us to also be a bridge introducing him into the whole Carnival scene – whereas he had inspired us and mentored us prior to that, we were actually now mentoring him in the Carnival scene cause he hadn’t been on the Carnival scene for a good couple years before and we had been in it for a few. We really worked the circuit that year and even did a guest performance at Soca Monarch that year.

“The following year was a tremendous shock when he passed on Soca Monarch night and it was a big transition year for us as well, because that was the year we parted with Rituals and Rituals folded and that was the year we decided to go on and do The 3Canal Show as well.”

“One of the persons who was influential in my music taking the direction that it has was Andre. I was then an intense classical musician, but his empathy for me and the classical music encouraged me to keep going and to grow. You would understand that I came to the wider music scape with a certain level of apprehension and it was a smile from Andre as it were that encouraged me to continue to go on.

“You would not believe how important it is to a musician of a different genre to be met with a smile from someone from a different circle. When others would have a problem with what I was doing, Andre would tell them to let me be because, “The man know what he doing, allyuh just doh understand.” When I had become so frustrated over the music and decided to put it aside and study law, Andre told me that opportunity is a funny thing, it always comes when you least expect it so I should keep practising. He was always a welcoming person.”

“Andre was in many ways a mentor to me. I got my break on the local scene through Andre in 1983 when he had me work on a project with him, Ella Andall and Happy Williams. That was real exposure for me at that time. I was a member of NJAC at the time and in their events was featured as a solo drummer. Andre came to do something with us and we met working on a show at NUGFW Hall, ‘Jamming At The Crossroads’ and he asked me to work with him some more.

“I became a full-time member of Contraband in 1987, but before that we did a lot together. Andre put me out there so I could be seen by other people who I would end up working with, people like Clive Zanda, Richard Bailey, Andy Narell and many others. He always shared what he was listening to at any time with me and it was primarily Andre who took me from one level of playing to expanding my horizons to Latin, jazz, fusions and other genres. The years with him exposed me to so much. It was real meaningful to me to have known Andre.”

“Andre was a major influence on my music. I began playing with him when I returned to Trinidad and I knew his music for all the years, but I had never played with him till then. I hooked up with Andre by accident when I was doing something at the Trinidad Theatre Workshop and he was there. He heard me play and he invited me to come and work with him and well, we had a couple great years working together in the band.

“The saddest thing is we will never hear that music again. When Andre wrote, he wrote from a Caribbean space. Yes he was locked into the Trinidadian vibe, but he could take the music and play it anywhere in the Caribbean or anywhere else for that matter and the people there could relate. Andre’s music transcended space and time. We were actually planning to do a major show in tribute to him last year and then the SoE happened and we had to cancel because we had no idea when it would have ended. Andre is very much missed.”