In the following video, Trinidadian dancer and choreographer, Gene Toney, demonstrates short examples of various Caribbean dance rhythms and songs. He is accompanied in these illustrations by his wife, Rosanna, herself a dancer, and Billy Sammy, who has been associated with Gene since his early teenage life.

Gene’s explication of the different dance genres show the continued impact of drumming, dancing, and singing of the different West African ethnic groups that populated the islands of the Caribbean during the colonial period, through slavery and post Emancipation. The first dance he speaks about is the yanvalou, an Afro-religious ritual dance of Haiti; one of the dances experienced and written about by the late Katrine Dunham during her research trips to Haiti in the 1920s and 30s.

The yanvolou is dealt with in some detail by Gerdes Fleurant in his 1996 book, Dancing Spirits: Rhythms and Rituals of Haitian Vodun, the Rada Rite. Trinidad has had its own Rada community, in Belmont for example, (see Andrew Carr’s A Rada Community in Trinidad, 1989), through which dances such as the yanvalou would become incorporated into the repertoire of dance companies.

Gene identifies the mandjani as another of the Afro-Caribbean dances and describes this dance as a “feat dance” traditionally performed during the initiation rituals to mark the passage youth into adulthood. In a comparative study of the performance of this dance in the United States and the African continent, Mark Sunkett (1995) noted that the mandiani (Sunkett) significantly influenced djimbe drumming and its style of performance in North America from the 1950s onwards.

Next Gene deals with the bele. He points out that there are different types of bele dances through out the Caribbean. This dance was observed and written about by anthropologists researching the culture of the Caribbean during the first half of the 20th century. Melville Herskovits spoke about the bele being performed at wakes as part of the burial rites for the deceased in the village of Toco, in his Trinidad Village, 1947. 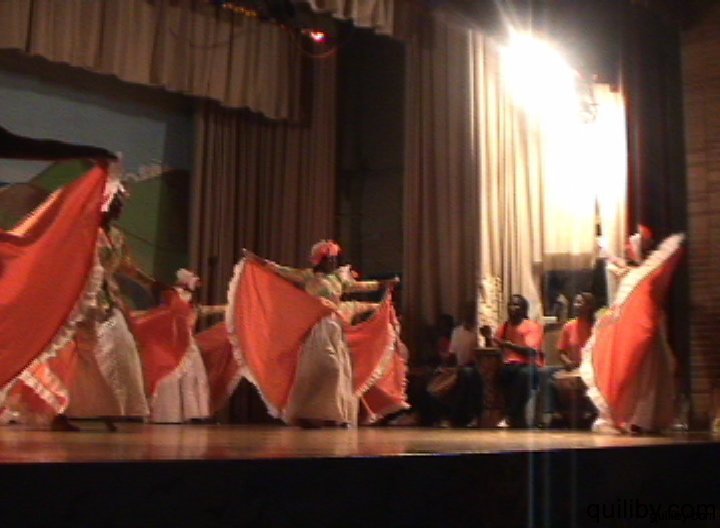 Cowley (1996) speaks of the bele being performed in a completely different setting for the opening of official functions of the colonial authorities in the late 19th to early 20th century. Authors on the Big Drum Dance of Grenada and Carriacou, such as Pearse (1955) and McDaniel (1998), have identified the bele as one of the dance performed in this festival.

The bele is categorized among the creole dances as opposed to opening dances of the Big Drum, which are performed in homage to the African ancestors and in memory the different West African ethnic groups from which the enslaved came. Gene’s demonstration of this revered Caribbean dance highlights these contrasting contexts within which scholars have situated it.

The Grand Bele is described by Gene as having derived from the appropriation of the French minuet by enslaved Africans, who infused it with their aesthetics. In contrast with this, Gene notes that the accompanying drum rhythms of the Congo Bele are derived from the drumming played as part of the rituals associated with Shango Orisha practice. Additionally, with the title Congo, this bele can align with those Big Drum dances that honored the African ethnicities, and the refrain “rere, rere, Congo,” which is sung, suggest the calling of a Congo ancestral spirit into the performance.

Gene give some brief examples of Orisha dances; specifically the dances of the deities Ogun and Shakpana. These present further evidence of how the religious ritual practices of West Africa in general, and those of the Yoruba in particular, have informed the artistic creation of dance in the Caribbean.