May 17th 2018 marks the 8th anniversary of the death of Brian Honore, who was known in the calypso world as Commentor and in traditional mas’ circles as the Reincarnation of the O’Cangaceiro, Midnight Robber. Brian dedicated his life to the defense and upliftment of the rich cultural traditions of the people of the twin island state of Trinidad and Tobago and the Caribbean at large.

Drop Your Keys and Bow Your Knees

Drop your keys and bow your knees

For I, O’Cangaciero has come forth

May 17th 2011 marked the 6th anniversary of the death of Brian Honore, who was known in the calypso world as Commentor, and in traditional mas’ circles, as the Reincarnation of the O’Cangaciero, Midnight Robber. Brian dedicated his life to the defense and upliftment of the rich cultural traditions of the people of the twin island state of Trinidad and Tobago and the Caribbean at large.

His commitment as a cultural activist fueled his development as a composer and performer of calypsos with incisive social and political commentaries, which he performed in the calypso tents, communities, and as a member of the People’s Cultural Association. His love for the theatrical arts led him to study at the Creative Arts Centre of the University of the West Indies, and he played significant roles in some of the Centre’s signature productions: Sing the Chorus, Ah Wanna Fall, and The Roaring ’70s. These shows featured calypsos, calypsonians, and the social and political conditions of the historical periods engaged in these musicals. 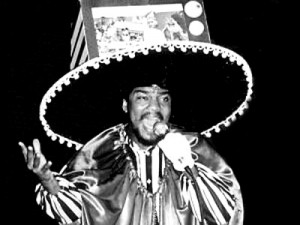 Among the traditional mas’ fraternity, Brian earned the deepest respect and the highest of accolades for his annual portrayals of the Midnight Robber, and his tremendous efforts to revive and propagate these doughty characters of the Trinidad Carnival. He paid homage to the “ole timers” of the art, developing a solid friendship with the late Anthony “Puggy” Joseph with whom he produced a recording of “robber speeches.” One of Brian’s biggest accomplishment, with regard to this art form, is the overt fusion of boasting bravado of robber-talk and the social/political commentary of calypso.

This was first revealed in his seminal calypso – The Opera of the Midnight Robber, a song that imaginatively dealt with the numerous exposures of corrupt business deals in the upper echelons of Trinidadian society and government in the early 1980s. The Satellite Robber, which focused on cultural imperialism, and the growth and impact of satellite television on “home-grown” artistic production in Trinidad, is another of Brian compositions that embodies this style:

The Opera of the Midnight Robber

Tell him ah say, ah want back mih crown, I am the King Robber in the de town

Get down from my thrown

Was only a mas ah bone

When he come out to kill or slay

He has to point revolvers at men

But when this Robber want to plunder

All I need is a ballpoint pen

I aint pulling off no robbery

Or risking shoot out with Randy B

When I could open an agency

for some airline company

Ah meet a robber in town

with a Devilish frown and a big, big dish on he back

He say drop on your knees

Surrender your keys and get ready for my attack

He say, ah bring you a dish

To fulfil your wish

To dazzle your eyes

That you belong to Uncle Sam

Join the US army

No Scouting with Holly B

When ah dishing the Dynasty

I am your satellite robber

What you can not tote you will drag

I’m here to ripe out your heart

Till you worship the Yankee Flag

Brian Honore’s work in the arts was but a part of a larger commitment he held for the noble ideals of freedom, equality, and justice for all. Thus he took the passionate fire in his soul to the trade unions, into the sectors in which he labored, and the communities in which he lived.