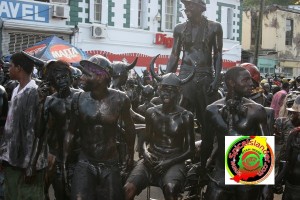 St. George’s, August 18, 2011 – Spicemas organizers are standing firm on this year’s theme which sparked debate among Grenadians at home and abroad.

The 2011 carnival theme was, “Uniquely Rooted in our Rich Ancestral Traditions. Spicemas: Home of 100,000 Jab Jabs.’’

“I am comfortable in saying that traditional mas is what stands out for Grenada. Jab Jab is unique to Grenada,’’ said Senator Arley Gill, Minister with responsibility for Culture.

He made the comment on “Beyond the Headlines,’’ the live GBN television show hosted by veteran broadcaster Lew Smith.

Sen. Gill and Grenada Carnival Committee (GCC) Chairman, Collin Dowe, both defended the chosen theme, despite criticism from some individuals and groups such as the Alliance of Evangelical Churches.

The Alliance called the theme “distasteful and disrespectful of the sensibilities of Grenadians who subscribe to Biblical Christianity.’’ It described Jab Jab as “a celebration and worship of Satan who was cast out of heaven in the first place because of his ambition and desire to claim God’s prerogatives.’’

However, historian Dr. Nicole L. Phillip is among many Grenadians who find no fault with the theme.

“Firstly, throughout the debate the theme has been misrepresented in its stating,’’ argued Dr. Phillip. “Critics, including the churches, claimed that the theme was ‘Grenada: the home of 100,000 Jab Jabs’. Simple research and inquiry, just by looking at the advertisements on television, would have informed them that the theme was: ‘Uniquely Rooted in our Rich Ancestral Traditions. Spicemas: Home of 100, 000 Jab Jabs.’’

She added that by “misrepresenting the theme, the critics have entirely missed the point of or substance of the chosen theme. In so doing it is difficult if not near impossible to make a rational judgment based on erroneous information.’’

According to Dr. Phillip, Spicemas is one of the best carnivals in the Caribbean.

However, she said that if Grenadians are to compete and establish a carnival niche, “an appropriate tag line needs to be used to promote this festival. It seems obvious that this was the thinking behind the theme chosen this year. Grenada can boast of being the only island that displays, year after year, from as far back as carnival has been recorded, unique aspects of traditional mas.’’

As far as Dr. Phillip is concerned, “the choice of the number 100,000 is simply a play on our population figure. It does not imply that all other aspects of carnival would be sidelined and there will only be Jab Jabs on the road. It simply emphasizes the need to highlight our traditional mas as being different and thus making the Grenada carnival experience one of a kind.’’

The President of the St. Andrew’s Development Organization (SADO), Martha Bowen, has reminded Grenadians of the importance of celebrating their African heritage.

“We must keep that flame burning,’’ Bowen said August 1 at the SADO-sponsored 2011 Emancipation Day celebrations and Rainbow City Festival in St. Andrew.

Emancipation Day commemorates the official proclamation of 1838 when enslaved Africans working on sugar plantations in Grenada and other British colonies in the Caribbean were granted their freedom from chattel slavery.

According to Bowen, Emancipation gave the fore-parents of today’s Africans “the freedom to express themselves and to practice all their customs and traditions.’’

She added that the customs and traditions are now part of “our culture. It is part of us, even though we may be influenced by outside culture. We still have to hold on to what is unique – our African roots.’’

Emancipation Day included a march around the Town of Grenville, a cultural show and an exhibition of locally made craft, clothing, food and drinks at the Grenville Car Park.

Bowen said the event “remains an exhibition of our Grenadian culture centered around Emancipation.’’

Among the hundreds from St. Andrew and across Grenada who attended the August 1 celebration of Emancipation was MP for St. Patrick East, Prime Minister Hon. Tillman Thomas.

The theme of the Rainbow City activities was, “Celebrating our African Heritage with the Spirit of Emancipation”.