The following John Leland article was published in NYTimes.com, Jan. 3, 2013. 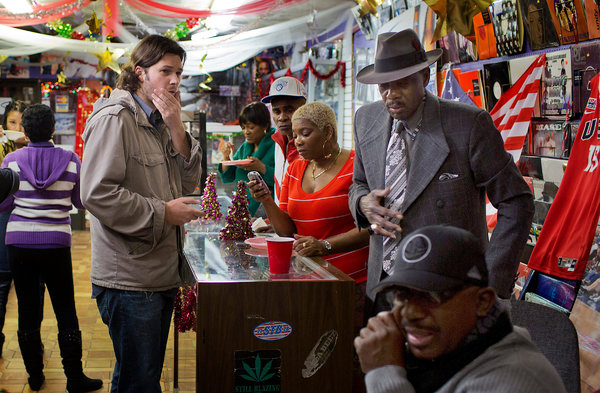 SINCE Rawlston Charles opened Charlie’s Calypso City, on Fulton Street in Bedford-Stuyvesant, in July 1972, the store has been a hub for Brooklyn’s Caribbean community, reinventing itself for each era.

n the 1970s, when calypso records were hard to find, the store was a go-to source for sounds straight out of Port of Spain, Trinidad. In the 1980s, when Mr. Charles, 66, opened a recording studio and record company upstairs, it was a magnet not just for calypso performers, but also for rappers like Whodini and the Fat Boys.

In the 1990s and early 2000s, as the borough’s island population grew, the record store expanded and became an essential part of the annual West Indian American Day Parade in Crown Heights, holding a party to start the Labor Day weekend.

And in our own fallen times, when record stores are heading toward obsolescence?

“It’s like the neighborhood Cheers,” said Tammy Hall, 53, lingering in the store on a recent Friday night, along with about a dozen other longtime regulars — drinking wine or soda; eating rice and peas, barbecue chicken or spicy cow’s feet; shouting around a television that played a Nets game.

Ms. Hall’s partner, Norris Thompson, 57, has been going to Charlie’s for 40 years, since he and his friend John Evelyn, now 60, were the store’s first sales clerks. Neither still works there, but chances are this is where they will be on a Friday night, talking about sports, music, Caribbean politics, American politics and nothing in particular. “This is the mecca of everything right here,” said Michael Greaves, a board member of the annual parade. “The ladies treat us like kings. And you couldn’t find a better guy than Charlie to hang out with. He tolerates us.”

Mr. Charles, a native of Tobago, started the store largely because he couldn’t find the calypso records that had been a vital part of his youth. At the time, he said, Fulton Street was a forbidding place. As the neighborhood improved, he watched his children thrive: his daughter Tina Charles, shown in posters and newspaper clippings on the store’s walls, was the most valuable player in the W.N.B.A. last year, and his son, Rawlston Charles Jr., plays basketball in Europe.

But the store is not the business that it once was. Young people rarely enter, he said, and even older customers are scarce. A nearby mainstay, Birdel’s Records, which had been in business since 1944, closed in 2011, done in by the same forces now eating away at Charlie’s. If he did not own the building, he said, it would be hard to keep going.

For now, though, he still has Friday nights. The crowd here might be intimidating to strangers: Sometimes people are yelling at the television; sometimes they are hitting on percussion instruments called irons, modeled on automobile brake hubs.

But for the regulars, it is a place beyond commerce — a necessary destination for visiting musicians, a place where there are chairs waiting and arguments to be joined. “When we want to see someone, we say, ‘Come by Charlie’s,’ ” said Kenny Alexander, 66. “It’s like my second home.”

The music thumped, the Nets won, the food and wine were still going strong. The secret? Mr. Charles, dressed in a natty gray jacket, looked over at his friends.

“Hard work, perseverance; believe in yourself and just stay because of the love you have for it,” he said, adding, “I’m not making a whole bunch of money, but I’m O.K.; I can survive.”

It was the last get-together of the year, and a warm and caloric tiding for the new one about to begin.

For the original article: Charlie’s Calypso City, the Caribbean Cheers of Brooklyn – NYTimes.com.