The following article was written by Wayne Bowman and published in the Trinidad Express Newpaper, Apr 23, 2012. 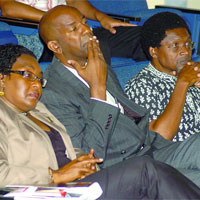 The Department of Creative and Festival Arts at the University of the West Indies, St Augustine, on Friday hosted the second edition of its annual TH?NK conference at the Faculty of Engineering.

The conference series examines various facets of local culture, festival and performance arts and explores how can they be effectively employed towards the social, aesthetic and financial benefits of the people.

Conceptualised by cultural researcher Dr Suzanne Burke, TH?NK also dissects Government policy on culture, identifying areas where there may be shortfalls and things that may have been overlooked.

Through panel discussions and lecture presentations, ideas are compiled and documented. The papers are made available for researchers and those responsible for formulating policy on the local entertainment industry, culture and festival arts.

At the opening session of this year’s TH?NK, the keynote address, titled “The Role of Culture in Caribbean Development”, was presented by Jamaica’s Director of Culture, Sydney Bartley, who is hailed as a guru of culture throughout the Caribbean and beyond. Bartley noted that, throughout the Caribbean, influences from Europe and America overpower the cultures of the islands, overshadowing the identities of the peoples.

In one of his examples of this, Bartley quoted Bob Marley’s “No Woman No Cry” to show how the people have been changed by invasive foreign influences. “I remember when we used to sit in a government yard in Trench Town. And then Georgie would make the fire light, log wood burning through the night. Then we would cook cornmeal porridge of which I’ll share with you,” sang Bartley, who was joined by some in the audience.

Bartley then explained that Marley’s lyrics referenced what life was like in the Caribbean then when men, elders and youth alike used to sit together and reason.

He said women did not cry when men sat and talked, conversed, worked things out instead of shooting one another, even in hard times. When men sit together and observe women don’t cry, Bartley said.

Bartley also likened the lyric on sharing the cornmeal porridge to the days when neighbours shared a cup of sugar and other things with one another.

Society now teaches people to lock into themselves and not interact with their neighbours, he said.

Bartley said community living was how the slaves brought here survived mentally because, after the entire day in the fields, at night they ate together in the barrack yard and shared stories, drummed and danced.

Bartley said the two things Caribbean people excel the most in, sport and culture, are designated as extracurricular activities. He said this is the biggest failure of the Caribbean education system and even went on to knock the university system, saying it continues to put the proverbial cart before the horse where sport and the arts are concerned.

Bartley said if an artiste such as Machel Montano were to decide to pursue university studies here in the Caribbean now he would have to start at the beginning in spite of his years of success and achievements.

The right thing to do, Bartley said, would be to allow Montano credits for what he has accomplished throughout the years he has been doing his music. Bartley said the system has to be changed to serve the people of the Caribbean specifically so we can enjoy the maximum benefits of what we possess.

Bartley said nothing cultural has ever come out of universities because it’s the grassroots people who have created their cultural identities. Therefore, said Bartley, any government-formulated cultural policy and cultural education plan must consider the cultural identity of the people.

Bartley said how the people through the ages have healed themselves using herbs and the things of nature, to how they made use of limited financial and other resources, has shaped the culture and seen them survive.

An interesting moment in Bartley’s speech was his invitation to the participants to join him in singing Bob Marley’s “Redemption Song”, which everyone did heartedly.

This Bartley did to drive home the point that it is by remembering who we are as a united Caribbean people that will make us prosper.

Bartley also in his presentation celebrated the music of the Mighty Sparrow and David Rudder as artistes who, like Marley, have helped the Caribbean people sing their own songs despite being bombarded by foreign cultures.