The following is a review, published in Black Grooves, of the Universal Music Group 40th anniversary release of Marvin Gaye’s What’s Going On album. 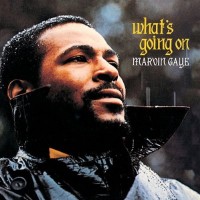 Marvin Gaye wrote and produced the suite of songs that make up What’s Going On out of what he called a religious motivation to speak truth to troubled people in a troubled time.  That was back in 1971.  Men were coming home from an unpopular war, their bodies and souls in tatters, and they couldn’t find jobs. The natural environment was threatened.  Hopelessness, drug addiction and violence dominated life in the inner cities.  It’s a sad commentary on American society that so many of these beautiful and deeply disturbing songs still ring as true in 2011 as they did in 1971.

Despite that depressing perspective, this deluxe reissue (a gatefold LP with 2 CDs inserted in the back cover) is a joyous occasion for fans of great soul music. Universal Music Group has remastered the original album (CD 1), with resulting punchier sound.  Also included on the first CD are the original mono single versions of several songs plus some unreleased demos and mixes.

CD 2, called “The Detroit Instrumental Sessions and More” is, first of all, a sampler’s delight as well as college-level schooling on how great funk beats and hooks are laid into coherent grooves.  The tracks also provide a window into Gaye’s creative process right after What’s Going On exploded on the scene and raced up the charts, showing what sorts of musical ideas he contemplated exploring and exploiting.  Judging from many of the hard-funk grooves, he was headed where Jimi Hendrix had gone in the last year of his life, toward a meeting of rock and soul with a funk beat that included layers of rock-style distorted guitars and heavy electric bass.

The main feature of the set is an LP of the original “Detroit” mix from April 1971.  What was actually issued as Tamla TS 310 in May 1971 was a remix and revision done in Los Angeles, just weeks before the final release date (the new LP was not previewed for this review).

What’s Going On represented a new direction at Motown.  With this album, Marvin Gaye moved Motown into the ‘70s and moved his music into a new, serious and thoughtful, realm. But it was a struggle to get it released. According to the liner notes, Gaye put his career on the line with Motown founder Berry Gordy, who was also his brother-in-law.  After Gordy delayed putting out the single of “What’s Going On,” Gaye threatened to “never record for (Gordy) again.”  In a recent interview with Marc Myers, published in the Wall Street Journal and also on Myers’ Jazzwax blog, Gordy denied there was that much drama but admitted that he had strong reservations about an album he considered commercially questionable and potentially very controversial and divisive.  The album did succeed in the marketplace and its prominence grew with time, causing Gordy to later admit that “Marvin was right.”

According to Ben Edmonds’ liner notes, the album was produced and overseen by Gaye, but many others played key parts.  The title track was conceived by Obie Benson (of the Four Tops) and Al Cleveland, and then embraced, altered and re-worked by Gaye and the “Funk Brothers” (Motown’s studio musicians).  Gaye’s wife, Anna Gordy Gaye, helped with lyrics to “Flying High.”  Motown elevator operator James Nyx came up with the lyrics used in “What’s Happening Brother,” “God Is Love,” and “Inner City Blues.”  Gaye was solely responsible for “Mercy Mercy Me (The Ecology).” Gaye also added outside musicians, including jazz drummer Chet Forest and saxman Wild Bill Moore, plus lush instrumentations by David Van DePitte (who was given a credit on the front cover of the LP).

What’s Going On was also the last major Motown album recorded and produced in Detroit; the company completed its move to Los Angeles while the album was still on the Billboard charts.  The new, complex and mature music style that Gaye pioneered was immediately embraced by Stevie Wonder and other Motown artists, and the days of “hit factory machine” pop ditties were over. In that same era, Motown had success with Rare Earth, an all-white rock band.

Marvin Gaye went on to other great successes, but What’s Going On will always stand as his deepest and broadest statement, a suite of music that was very bold and new in its time and still sounds fresh and relevant today.  The facts of Gaye’s later life and death, and the fact that his songs still ring true 40 years later, add a poignancy to this new reissue.  In the tradition of well-done deluxe reissues, this set augments the great album at its core with good liner notes and artwork, related musical perspective and something new and collectable with the alternate-mix LP.